Hunting with a Boomerang

About Australian hunting and fighting boomerangs

Australian aboriginals do not hunt with light returning boomerangs. At least, they do not use their boomerang – as we understand the term today – as tools for hunting.
There are several kinds of boomerangs, but what we are mostly familiar with is the returning boomerang, which is, for all intents and purposes, merely a toy, a plaything for amusement (it is today a kind of sports for enthusiasts). 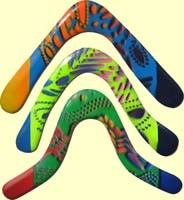 Furthermore, they can be thrown sideway when needed since they do not return.
Exceptions are special boomerangs for hunting birds that do return to the thrower after it misses its target, to be picked up for throwing again. They may be used against flying flocks such as bats or ducks, individual sitting birds, or perhaps smaller animals.

There are many ways a non-returning boomerang may be used for hunting. King Tutankhamen of Egypt used them to hunt ducks, probably throwing them at ducks rising from the water. If a heavy boomerang barges into a flock of ducks, it is bound to hit one or two if thrown correctly. Ducks and other waterfowls flying off from the water surface do it in one direction, so a leading throw can hit and most probably hurt the wing or neck enough to bring the fowl down.

Native Americans, notably the Hopi, also use the boomerang to hit small game such as rabbits and hares, but perhaps deer as well once in a while. Australian natives could throw it against an emu to hit the neck and break it, or one leg to immobilize it. The same may be done with a kangaroo or wallaby, if throwing is performed with skill and the boomerang is heavy enough to at least stun the animal. A sharp boomerang is then used to disembowel the animal to kill it. Another way is using the boomerang by deliberately throwing it against the tree’s leaves, to scare roosting birds to flying into prepared or throw-up nets.

But boomerangs went out of style after the bow and arrow was invented and adopted as a more efficient hunting weapon of choice. The Australian aborigines, being one a few peoples that never used the bow arrow, preserved the boomerang and skills of its use. So today, when we think of boomerangs, we think of Australian natives and returning flying wedges of wood.